In part one, I collected and prepared a bunch of data that I needed to create a fantasy football draft assistant (DAsHA), and exported all of that data to a .csv file. Now that I had all the data, it was time to implement the user interface for DAsHA – I wanted to make a tool into which I could feed (a) the current draft position and (b) players already picked, and return as much data as possible for me to pick the best player per position.

First, I did a bit of data cleanup so that the player scores could be displayed in a user-friend way. I also had to import all the necessary libraries to run my model.

Now that my data was ready, it was time to figure out what information I wanted to display.

The idea here is that DAsHA would return a panel of players at each position with the highest projected points and provide context as to which ones would be the best to pick that round. This was done in two ways:

Finally, since I had to act on all information, I needed DAsHA to generate charts and graphs that displayed all of these comparisons. Since I wanted DAsHA to be a heuristic helper (as compared to an out-and-out predictive tool), my goal was to provide as much data for myself to make an informed decision based on the variance/distribution of point projections in addition to the raw point totals.

I wrote each collection as a separate method in my Jupyter notebook so it could be easier to extend in the future. Below is my implementation of each method.

Now that I had the methods for populating the three arrays, I could put them all together like this:

(If you’re curious, the full code for DAsHA’s UI can be found on Github here).

Now that I had my player comparison information, it was time to build the scaffolding to visualize these results in a user interface! Since I wanted the most important information to help me draft first (I only have 90 seconds per round), I started off just showing a table of the top players:

Then, I visualized the scores and confidence intervals for these top players. 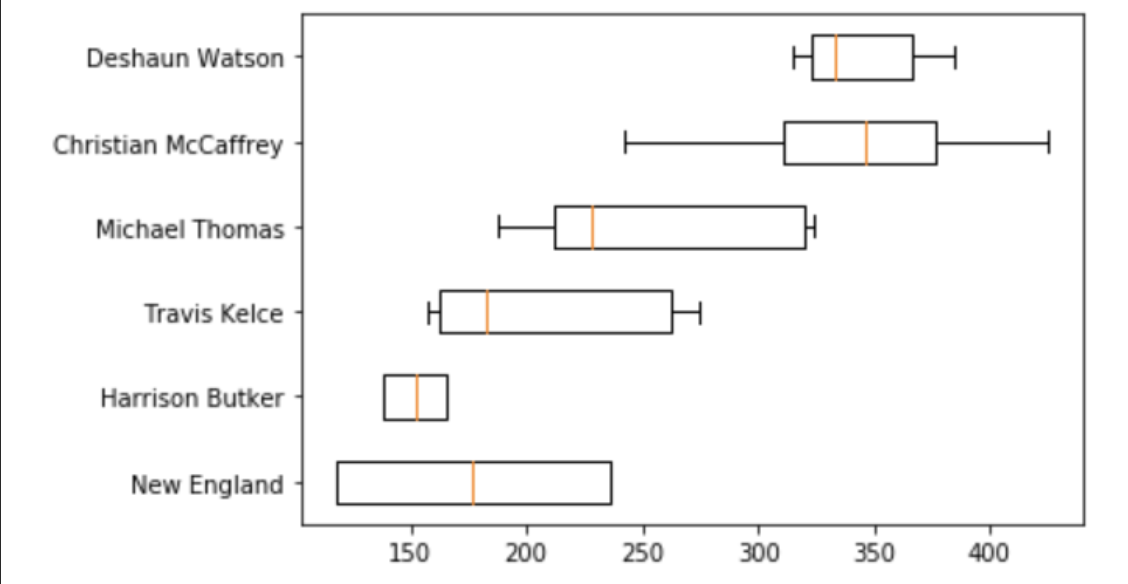 And finally, I grouped the second-best players by position,

and made box plots for each of them. 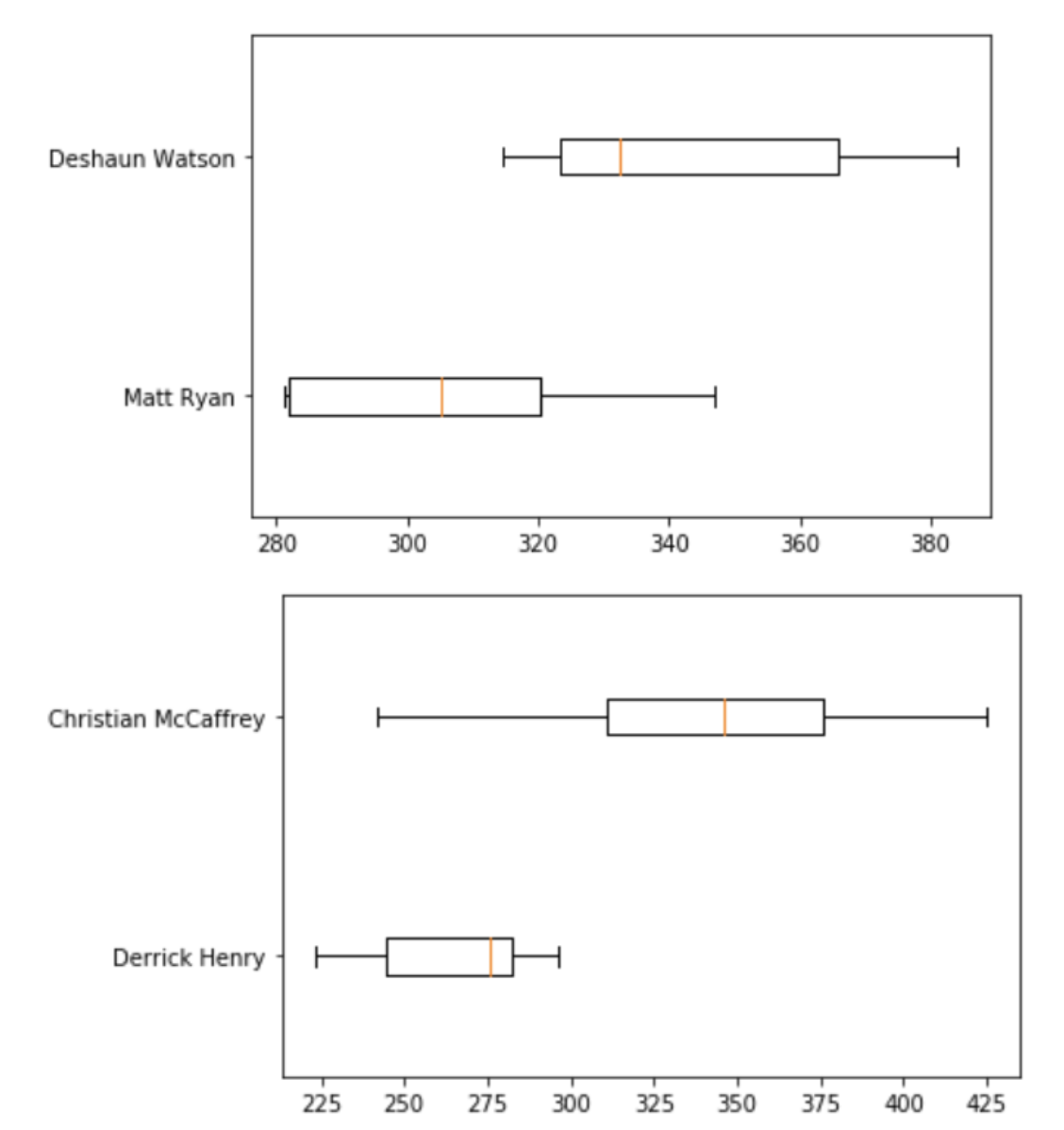 Tying all of these visualizations together led to a final output that looked something like this: 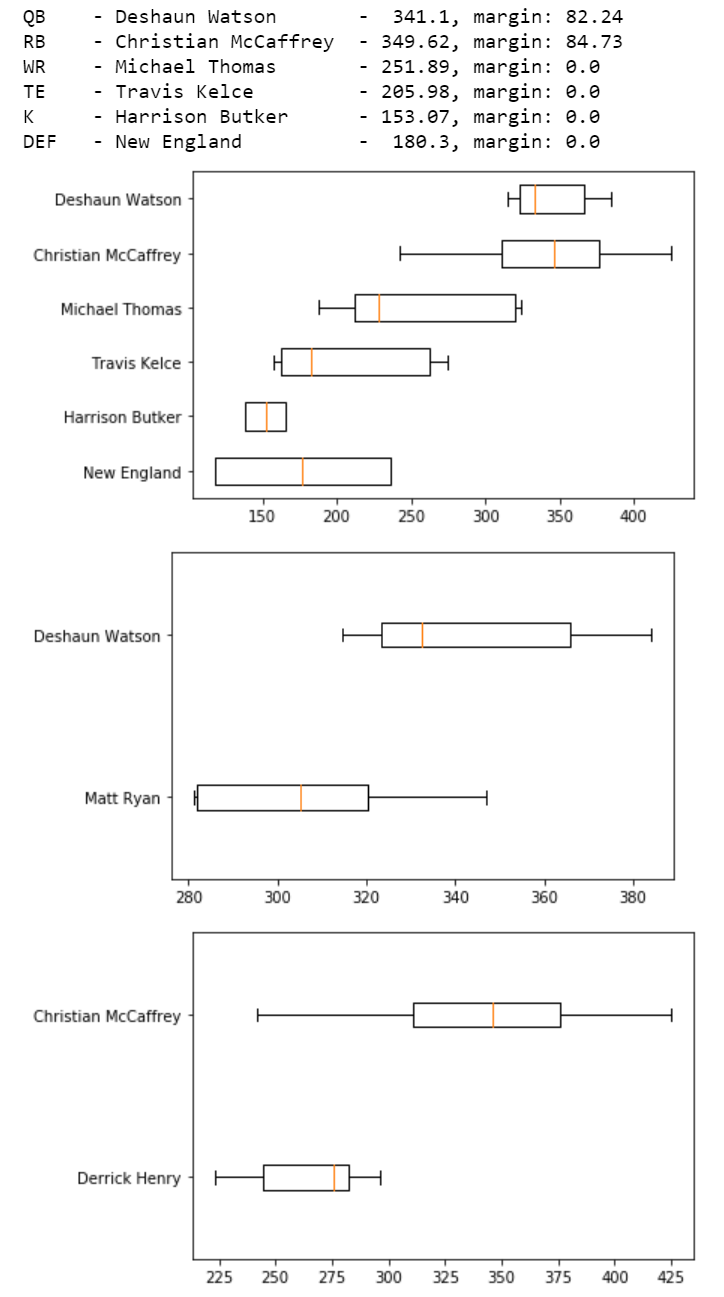 I’ll admit, I definitely hacked together this part, but when I was writing it the draft was only 20 minutes away! Basically, what I did was take advantage of my format; since DAsHA ran inside a Jupyter Notebook, I wrote little while loop to return True unless it was my turn. This way, I could run DAsHA live and feed it inputs while my draft was going:

Now that I had a rudimentary system for tracking state, I could run DAsHA live during my draft! All I had to do was feed it the (a) draft number and (b) the player taken, and when it was my turn it would show me the various visualizations that I put together earlier in this post. Pretty nifty!

While I hadn’t really set a concrete goal for DAsHA other than “beat ESPN’s player projections so that I could draft more shrewdly than my friends”, I’d say this project was a rousing success. On top of having the best draft out of all my friends (my team is the one on the top in the below image that has sadly taken a turn for the worse),

I learned a lot about estimating probability distributions using Gaussian KDEs (read part one for more details on that) and I had fun hacking a Jupyter notebook into a UI that I could use to help me draft in real-time.

Unfortunately, the end of this story is not a happy one; despite my excellent draft, my record this season is only 5-5. Perhaps for my next project I’ll use some data science to help me with my week over week player projections so I stop leaving my good players on the bench!